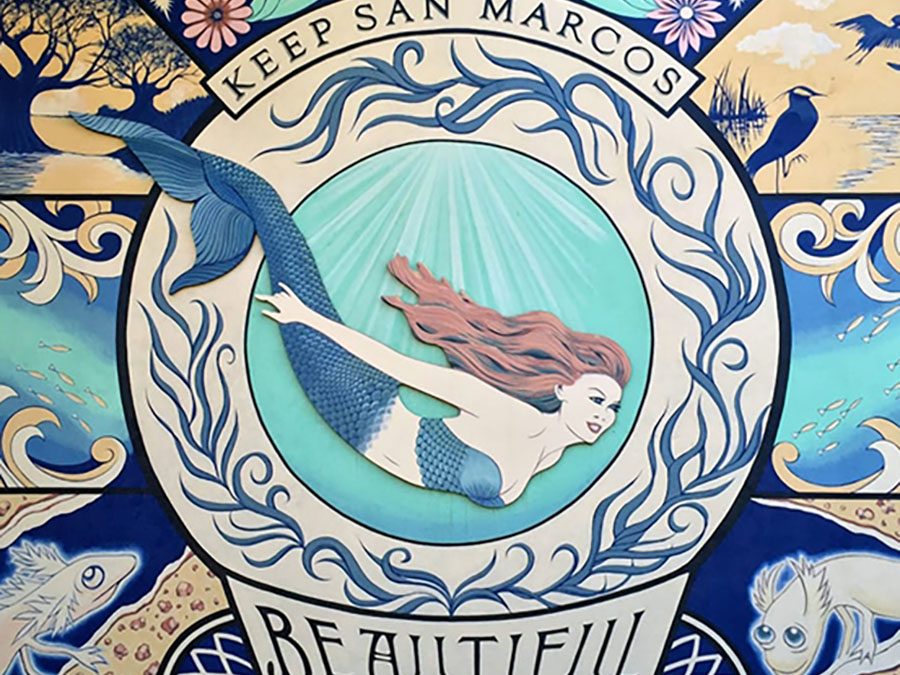 If you have ever explored the City of San Marcos, you probably wondered what the deal is with all of these mermaids. Downtown is filled with mermaid artwork and every year the Mermaid Society of San Marcos leads the Mermaid Promenade. Little do many know, San Marcos has a rich history in mermaid culture that explains the unique pride for these mythical river creatures. Read on to learn more about why San Marcos is now the official Mermaid Capital of Texas.

The Tale of Aquarena Springs

70 years ago, in 1951, the amusement park and major tourist destination Aquarena Springs Resort opened just off of Highway 81 in San Marcos. The park was built around Spring Lake with waters bubbling up from the Edwards Aquifer to create the headwaters of the San Marcos River. The resort featured an underwater mermaid shows in the world’s first underwater submarine theater.

“Even in subfreezing weather, four shows are produced every day at the submarine theatre. The secret – of course – is the pleasant, year-round 70-degree temperatures of the water pumped into the Aquarena pool from near-by springs.” – Norris Jackson, author of “Mermaid Theater” article in the Popular Mechanics Magazine, June 1952

The mermaids, also nicknamed “aquamaids”, would perform underwater with the help of air hoses when they needed to catch their breath. The aquamaids trained themselves to hold their breath for long periods of time so they could perform their ballet routines and special tricks like eating and drinking while submerged. Along with the aquamaids, clowns like Glurpo and Glurpette would sing and blow smoke rings underwater to provide comedic relief.

Other attractions included a Swiss sky ride, glass bottom boat tours, and performances from Ralph the Swimming Pig. Nearly 250,000 visitors came to Aquarena Springs annually and many would stay in the Aquarena Springs Hotel along the lake.

In the early 90’s, Texas State University acquired the Aquarena Springs property with the goal to preserve the natural ecosystem and use the resort for educational purposes. The Meadows Center for Water and the Environment was established in 2012 and focuses on ecological research and the water’s relationship with the environment. The Aquarena Springs Hotel was remodeled to become the Texas River Center and you can still take a glass bottom boat tour along Spring Lake today.

Leaders of the Modern Mermaid Movement

Despite the closing of Aquarena Springs and its quirky performances, he mermaid spirit is alive and well in San Marcos, and modern aquamaids thrive on supporting the local community. In 2014, the Mermaid Society of Texas was established and aims to empower the symbol of the mermaid, embrace local arts and culture, and preserve the San Marcos River.

This local organization is responsible for the Mermaid Capital of Texas Festival (previously known as SPLASH Festival), which spans from September 11th to September 25th this year, with events like the Mermaid Art Ball, Downtown Mermaid Promenade, and the Mermaid AquaFaire.

Message from the Mermaid Society regarding the 2021 Mermaid Capital of Texas Festival: Due to health concerns regarding Covid-19 and the delta variant, we had to make the difficult decision to cancel all other Mermaid Society annual events that posed health risks due to indoor or closed space settings. The events postponed until 2022 are the following: Mermaid Society Art Ball, MERtini Shakedown Competition, Siren Run & Splash, Aqua Faire, AquaMade Runway & Brunch and in-person River Guardianship Symposium and Arts, Culture & Preservation Symposium. Our team is discussing the option of creating a virtual symposium for both events. We are moving forward with the 5th Annual Mermaid Promenade & Downtown Street Faire as planned. We feel the outdoor setting for the events provide ample space for safe distancing.

Images of the 2019 SPLASH Festival from mermaidsocietysmtx.com

Along with the famous mermaid festivities, the Mermaid Society hosts youth programs to engage local children in arts and cultural activities of the San Marcos community. The organization also holds a monthly art market event called The Mermaid Bazaar, currently hosted at Wonder World Cave and Adventure Park.  As of March 2021, the Mermaid Society has taken over the Mermaid March public art project. Started by the San Marcos Arts Commission a couple years prior, ten mermaid statues painted by area artists were erected around the downtown area to more visibly celebrate this mythical heritage of San Marcos.

To learn more about how the Mermaid Society initiatives promote art, culture, and sustainability in the San Marcos community, visit their website.

Officially the Mermaid Capital of Texas

To further solidify the mermaid spirit locally and beyond, in 2019, the San Marcos City Council announced that they would request passage of a legislative resolution to designate the city as the Mermaid Capital of Texas. After approval from the Texas Senate, the Texas House of Representatives were scheduled to vote on the designation but ran out of time.

Voting to name San Marcos the Mermaid Capital on Texas was back on the table for this year’s 87th Texas Legislative Session. On Monday, May 24, 2021, Governor Greg Abbot signed the bill officially designating San Marcos as the Mermaid Capital of Texas. With this designation, the City of San Marcos and the Mermaid Society can continue to promote the preservation of water resources and protection our natural environment, including the beloved San Marcos River – but now with even more fanfare and spirit.

Have any questions about the San Marcos area? Need any tips on visiting the city’s most exceptional destinations? Give us a call at (512) 392-3322 or email Live@LVLYLN.com and we’d be happy to tell you more about the city’s best kept secrets.