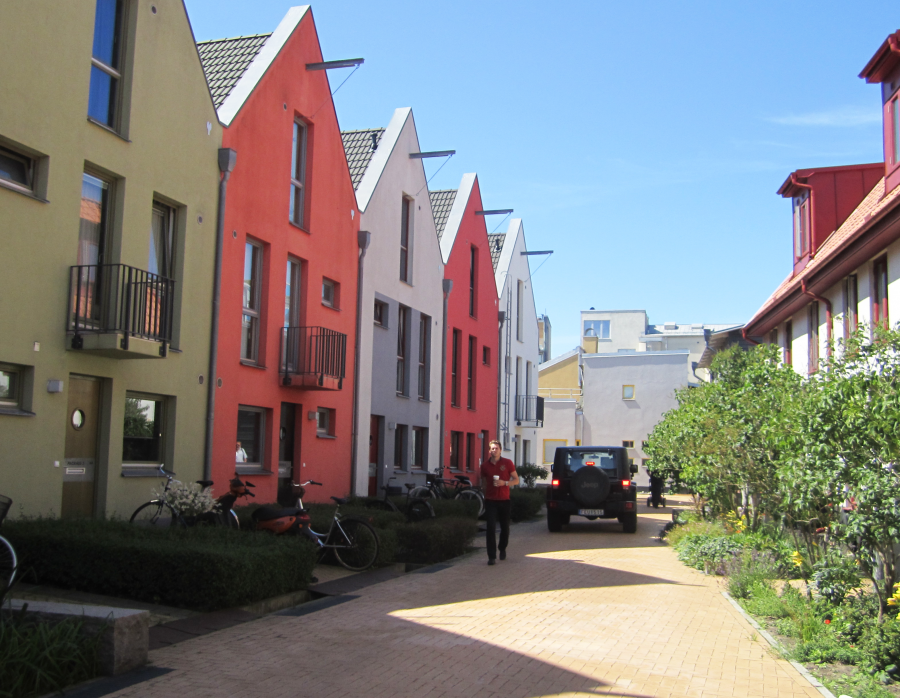 It’s not a coincidence that our pocket neighborhood is named Lively Lane ­– it’s the living street that lays the foundations of our community. The idea of a living street, also known as a shared street or home zone, prioritizes pedestrian and bicyclist comfort over the movement of automobiles and focuses on making the street an extension of the residences along it. The concept originates from the Dutch word “woonerf,” which roughly translates to “street for living.”

Although the need to prioritize pedestrian and bicyclist safety over automobile convenience is increasingly recognized in American street design, the concept of the woonerf takes this a step further.

Developed in the 1960s in Delft, NL the woonerf makes the divide between pedestrian sidewalks and vehicular lanes nearly seamless and instead organizes the street as an equally accessible place for everyone. With the absence of sidewalk boundaries and curbs, drivers are forced to slow down to walking speed so that pedestrians and the like can experience the road more safely.

Want to see a woonerf in action? Take a look at the video below to see Life on A Dutch Woonerf and see how people experience a living street:

According to Canin Associates, an urban design firm in Florida, woonerfs have proven successful by creating substantial safety improvements. Traffic incidents have dropped by 40% or more in Dutch areas that have adopted this concept.

You can also check out this vintage film clip from the film, Together We Cycle, demonstrating the woonerf concept:

The core idea of a living street design is that people are prioritized over cars so that the street can return to its historical roots as a space allowing for social interaction and, most importantly, a place where all road users should be able to feel safe.

At Lively Lane, we are channeling many of these concepts in our living street design by making sure it is not only a place to store a car but also a safe place for neighbors to interact.

Landscaping, entry planters at the front of each townhome, and protective lane posts are strategically placed around the community to encourage safer, reduced vehicular speeds. And, rather than being completely straight, the street itself incorporates small zigs and zags that require slower travel to navigate around parking spaces, trees, and townhomes.

And inclusive signage, such as the example pictured, is intended to help clearly notify those entering the area that different activities and road uses should be expected.

Not only is Lively Lane designed to encourage a safe, social environment, it has even more going on just below the surface than meets the eye. Constructed of a custom-engineered permeable paver system, Lively Lane will also be working hard to capture and treat stormwater runoff.

Consisting of stacked layers of porous materials and rock under concrete pavers, this living street will have the capacity to remove up to 93% of total suspended solids (e.g. water pollutants) typically derived from cars and miscellaneous debris. Rather than forming an impervious surface, the system is designed to let water flow into and through the open layers and naturally mimics and recreates natural rainwater infiltration.

Take a look at the diagram to get the basic idea of how a permeable paver system treats stormwater:

Benefits of a permeable paver system include the regulation of stormwater, a decrease in localized flooding risk, and the capture of water pollutants to prevent the flow of dirty runoff into natural waterways.

Creating a sustainable, ecologically sensitive pocket neighborhood is important to us at Lively Lane, and why the concept of a multifunctional living street is so integral to its design.  While the first phase of the Lane’s construction is still a few months away, we encourage you to take a closer look at this important community feature once it comes online!

To learn more about our community, start configuring your townhome today or get in touch for more information at Live@LVLYLN.com.